We believe that it is our foundational and important managerial task to establish and maintain a fair and efficient management system, while securing soundness and transparency in management, in order to enhance corporate value by fulfilling our corporate social responsibilities. We will keep on carrying out efficient and sound business operations to pursue corporate philosophy by enhancing corporate governance for fulfilling our responsibilities to stakeholders.

The following framework has been built for decision-making, supervising, and execution of management. 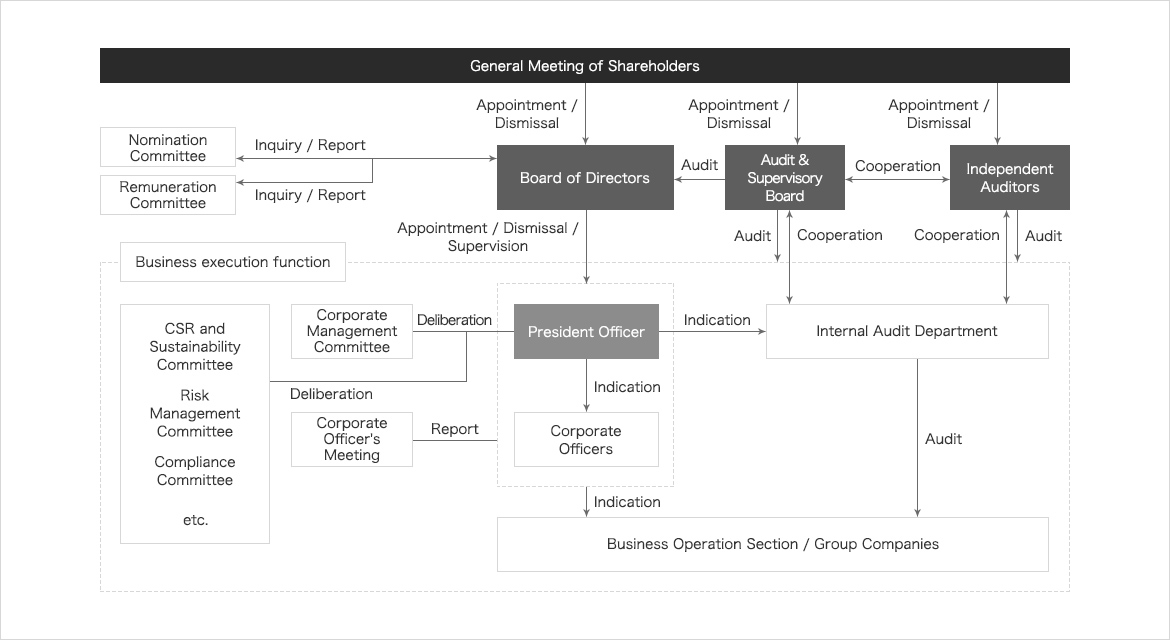 Board of Directors and Directors

Board of Directors is composed of 11 directors, 4 of which are outside directors.Meetings of the Board of Directors are held regularly once a month as well as whenever necessary for deliberation and determination with respect to issues as prescribed in applicable laws and regulations or articles of incorporation as well as other managerial key issues, and also for supervision of business execution status in response to reports from the directors. Additionally, Management Meetings composed of Directors are held regularly once a month for discussion and pre-grasping about business challenges to be addressed, and any possible risk that involves our company for enhancing the system that can be flexibly adaptable to change in the managerial environment.We have introduced Corporate Officer framework on April 2012 for the purpose of prompt execution of duties based on various policies determined by Board of Directors and clarifying resultant responsibilities. Board of Directors has nominated 25 corporate officers (6 of them work as directors) who share information, and exchange opinions on the status report concerning execution of duties in a cross-sectional way in Corporate Officers’ Meeting to be held once a month. Each term of Board of Directors and Corporate Officers’ Meeting is one year.

Board of Auditors and Auditors

Independency of Outside Director/Outside Auditor

Remuneration for Director and Auditor

We have established optional nomination/remuneration committee on April 2017 for rationality and transparency of nomination/determination of remuneration for the director. Since June 2017, targeting the directors and the corporate officers, we have introduced the share-based remuneration system of performance-based type as the executive remuneration system with high transparency and objectivity based on business performance for the purpose of raising awareness of contribution to improvement of business results on the medium- to long-term basis, and enhancement of the corporate value. This system is intended to evaluate the attainment level of business operations in terms of consolidated sales, consolidated operating profit, and ROIC as indexes for four business years from fiscal 2017 to 2020 within our medium-term management plan period.

Remuneration and bonus paid to directors and auditors in fiscal 2019

* Maximum amounts of remuneration paid to the directors were set by a resolution made at the 117th annual shareholders meeting (held on June 29, 2017) as follows.

At the 117th annual shareholders meeting, performance-linked stock compensation limit of 1,000 million yen were set for company directors and executive officers for the four fiscal years from 2017 to 2020.


* Maximum amounts of remuneration paid to the auditors were set by a resolution made at the 106th annual shareholders meeting (held on June 29, 2006) as follows.

* The amounts above include remuneration paid to one outside director who retired due to passing away on May 2, 2019 and one director and one auditor who resigned at the conclusion of 119th annual shareholders meeting (held on June 25, 2019).


* “Bonus” and “Stock compensation” are the amounts recorded as expenses in fiscal 2019.